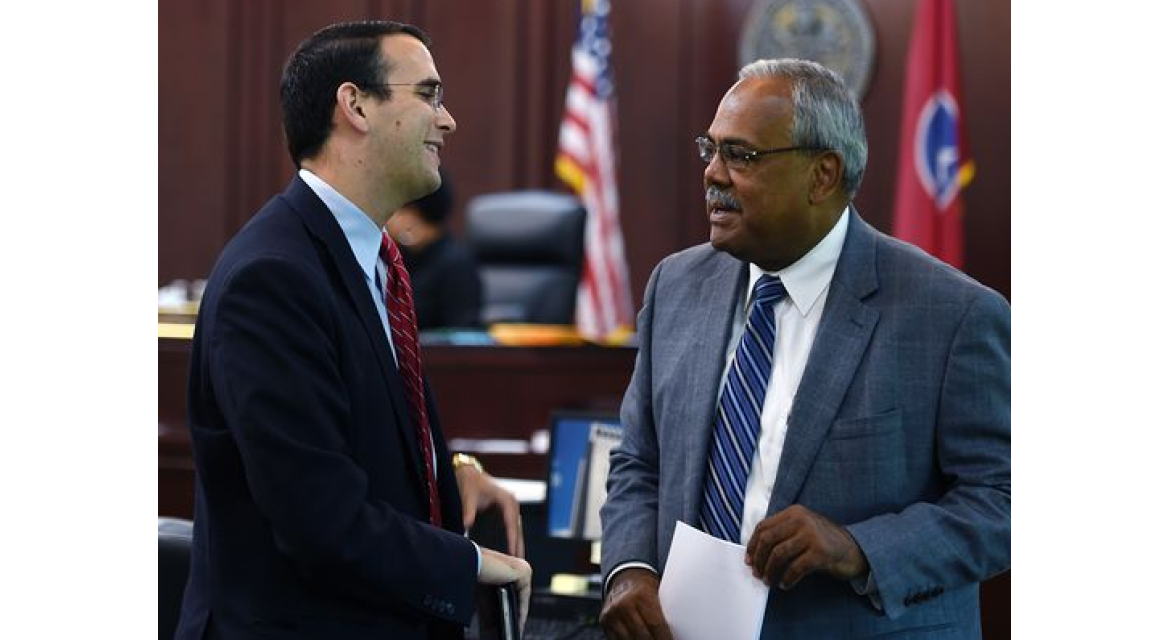 -The Tennessean: Tennessee Supreme Court moves up Nashville mayoral special election to May

-The Nashville Scene: Supreme Court: Mayoral Election Must Be Held in May

-The Nashville Post: Supreme Court moves mayoral election to May

-WPLN: Nashville Must Hold Next Mayor’s Election In May, Court Rules

-Nashville Scene:  Metro Legal Could Cost the City Money for Another Election

4.  Sullivan v. Benningfield—U.S. District Court for the Middle District of Tennessee/U.S. Court of Appeals for the Sixth Circuit (won)

–Plaintiffs’ Motion for Estoppel Based on Defendant Benningfield’s Public Reprimand

-The Tennessean: Court revives lawsuit against judge who shortened jail time if inmates got ‘sterilized’

-The Nashville Scene: Community Oversight Won Big Despite the Campaign to Defeat It

–Board Complaint and Demand to Cease and Desist

-Forbes: Tennessee Wants To Shut Down This Beauty And Health App For Offering ‘Highly Disturbing’ Competition

-Reason: Tennessee Cosmetology Board Admits it Doesn’t Have Authority To Regulate Tech Companies

-Daily Signal: How This Nashville Tech Company Challenged a State Regulatory Board and Won

-The Federalist Society: Regulatory Hurdles for Entrepreneurs: The Story of Project Belle

–Record Designations and Issues to Be Presented on Appeal

–The Tennessean: Sentenced to 17 years for low-level drug charge, Nashville man gets freedom thanks to deal with prosecutors

–Reason: How a Drug-Free School Zone Sent a Tennessee College Student to Prison For 17 Years

–The Tennessean:  He got 17 years for selling drugs near school. Now 12 Nashville officials are fighting on his behalf

-The Tennessean: More than a year after Jocques Clemmons died, police returned his phone to family

-The Tennessean: A year after Jocques Clemmons’ death, police still have his phone. His family wants it back.

-The Nashville Scene: It’s Been One Year Since the Jocques Clemmons Shooting

-Slate: An Attorney and a DA Are Seeking Justice for Tennesseans Convicted of “Homosexual Acts”

–Plaintiff’s Memorandum of Law in Support of a Preliminary Injunction

–Amicus Brief of the Beacon Center of Tennessee

-The Tennessean: Nashville judge rules against state in lawsuit over ‘blackout period’ for PACs

12.  George v. Hargett (on behalf of Amicus Curiae)—U.S. Court of Appeals for the Sixth Circuit (won)

–Brief of the “Yes On 1” Campaign as Amicus Curiae

-The Tennessean: Fate of Tennessee abortion measure Amendment 1 now up to appeals court

-Yes on 1: Yes on 1 Files State Court Motion on Behalf of Disenfranchised Voters

-Heat Street: Tennessee Cops Back Down on Fine For ‘Obscene’ Bumper Sticker of Stick Figures

–Defendant Hardin’s Memorandum in Support of Motion to Dismiss

–Petitioner’s Petition for Writ of Mandamus

–Judge Waverly Crenshaw Response in Opposition to Petition for Writ

–The Associated Press: Tennessee Prisoner Sentenced to Life at 15 Asks for Freedom

-Fox 17: Boyfriend Speaks Out After He Was Kidnapped by Beauty Queen and Accused Drug Dealer

*Agreed Order of Settlement and Compromise

-WKRN Channel 2: What do the indictments mean for lawsuits filed against Reinking, dad?

–Defendants’ Memorandum in Support of Motion to Dismiss

-TechDirt: Doctor Suing A Patient Over A Negative Review Has His Case Dismissed Under Tennessee’s New Anti-SLAPP Law

Daniel Horwitz is lawyer based in Nashville, Tennessee.  If you would like to purchase a consultation from Horwitz, you can do so using the following form: