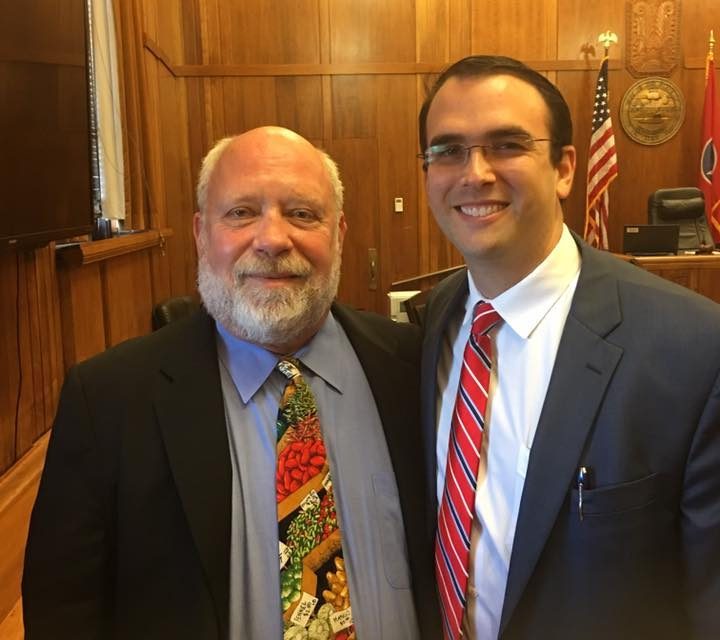 Randy Rayburn (left) and his attorney Daniel Horwitz (right) celebrate their victory following the complete dismissal of a defamation and false light lawsuit filed in Davidson County, Tennessee Circuit Court. The plaintiff was forced to pay $10,000 in attorney's fees to Rayburn as a sanction.

Daniel A. Horwitz is a premier speech defense lawyer who has successfully defended clients against multiple multimillion-dollar libel, slander, false light, and other speech-based lawsuits in Tennessee’s state and federal courts.

To provide a counterbalance to the financial threat posed by baseless defamation lawsuits, false light invasion of privacy lawsuits, and other speech-based lawsuits, laws aimed at deterring “Strategic Lawsuits Against Public Participation” (Anti-SLAPP laws) afford speakers a number of significant legal benefits, including the right to recover their legal fees, the right to stay discovery, and the right to file an immediate appeal if a case is not dismissed.  Until recently, Tennessee only had a limited anti-SLAPP law that was restricted to statements made to government agencies.  Fortunately, though, in 2019, Tennessee enacted the “Tennessee Public Participation Act”—the State’s first meaningful anti-SLAPP law—to protect Tennesseans’ right to free speech, which took effect on July 1, 2019.  Thus, effective July 1, 2019, the Randy Rayburns and Linda Schipanis and Bari Hardins of the world can now wield a powerful protective weapon against bad actors’ efforts to censor and intimidate them through frivolous speech-based lawsuits.

The Tennessee Public Participation Act has dramatically expanded the scope of speech that receives heightened legal protection in Tennessee. Under the Act, every “communication made in connection with a matter of public concern”—a term that is defined broadly and expressly encompasses statements involving issues of “health or safety” and “community well-being”—”that falls within the protection of the United States Constitution or the Tennessee Constitution” will come within the ambit of the law’s protection. In other words: Most statements made by citizens within the State of Tennessee—including social media posts and blog posts—now receive heightened protection against defamation lawsuits, false light invasion of privacy lawsuits, or lawsuits that assert claims such as “defamation by implication or innuendo.”  Defendants who are sued for claims such as “abuse of process” or “malicious prosecution” will frequently enjoy heightened protection under the Tennessee Public Participation Act as well.

Exercising one’s rights under the Tennessee Public Participation Act and defending against claims for defamation, libel, slander, false light invasion of privacy, defamation by implication or innuendo, abuse of process, malicious prosecution, and other speech-based torts in Tennessee requires specialized knowledge.   If you would like to purchase a consultation from Horwitz, you can do so using the following form:

–Defendants’ Memorandum in Support of Motion to Dismiss

-TechDirt: Doctor Suing A Patient Over A Negative Review Has His Case Dismissed Under Tennessee’s New Anti-SLAPP Law

–Defendant Hardin’s Memorandum in Support of Motion to Dismiss

-Heat Street: Tennessee Cops Back Down on Fine For ‘Obscene’ Bumper Sticker of Stick Figures

-The Tennessean: Nashville judge rules against state in lawsuit over ‘blackout period’ for PACs

20-17-101. This chapter shall be known and may be cited as the “Tennessee
Public Participation Act.”

20-17-102. The purpose of this chapter is to encourage and safeguard the
constitutional rights of persons to petition, to speak freely, to associate freely, and to participate in government to the fullest extent permitted by law and, at the same time, protect the rights of persons to file meritorious lawsuits for demonstrable injury. This chapter is consistent with and necessary to implement the rights protected by Article I, §§ 19 and 23, of the Constitution of Tennessee, as well as by the First Amendment to the United States Constitution, and shall be construed broadly to effectuate its purposes and intent.

(1) “Communication” means the making or submitting of a statement or document in any form or medium, including oral, written, audiovisual, or electronic;

(2) “Exercise of the right of association” means exercise of the constitutional right to join together to take collective action on a matter of public concern that falls within the protection of the United States Constitution or the Tennessee Constitution;

(3) “Exercise of the right of free speech” means a communication made
in connection with a matter of public concern or religious expression that falls within the protection of the United States Constitution or the Tennessee Constitution;

(4) “Exercise of the right to petition” means a communication that falls
within the protection of the United States Constitution or the Tennessee Constitution and:

(A) Is intended to encourage consideration or review of an issue
by a federal, state, or local legislative, executive, judicial, or other
governmental body; or

(B) Is intended to enlist public participation in an effort to effect
consideration of an issue by a federal, state, or local legislative,
executive, judicial, or other governmental body;

(5) “Legal action” means a claim, cause of action, petition, cross-claim, or counterclaim or any request for legal or equitable relief initiated against a private party;

(6) “Matter of public concern” includes an issue related to:

(A) Health or safety;

(B) Environmental, economic, or community well-being;

(E) A good, product, or service in the marketplace;

(G) Any other matter deemed by a court to involve a matter of
public concern; and

(7) “Party” does not include a governmental entity, agency, or employee.

(a) If a legal action is filed in response to a party’s exercise of the right of free speech, right to petition, or right of association, that party may petition the court to dismiss the legal action.

(b) Such a petition may be filed within sixty (60) calendar days from the date of service of the legal action or, in the court’s discretion, at any later time that the court deems proper.

(c) A response to the petition, including any opposing affidavits, may be served and filed by the opposing party no less than five (5) days before the hearing or, in the court’s discretion, at any earlier time that the court deems proper.

(d) All discovery in the legal action is stayed upon the filing of a petition under this section. The stay of discovery remains in effect until the entry of an order ruling on the petition. The court may allow specified and limited discovery relevant to the petition upon a showing of good cause.

(b) If the petitioning party meets this burden, the court shall dismiss the legal action unless the responding party establishes a prima facie case for each essential element of the claim in the legal action.

(c) Notwithstanding subsection (b), the court shall dismiss the legal
action if the petitioning party establishes a valid defense to the claims in the legal action.

(e) If the court dismisses a legal action pursuant to a petition filed under this chapter, the legal action or the challenged claim is dismissed with prejudice.

(f) If the court determines the responding party established a likelihood of prevailing on a claim:

(1) The fact that the court made that determination and the
substance of the determination may not be admitted into evidence later in
the case; and

(2) The determination does not affect the burden or standard of
proof in the proceeding.

20-17-106. The court’s order dismissing or refusing to dismiss a legal action
pursuant to a petition filed under this chapter is immediately appealable as a matter of right to the court of appeals. The Tennessee Rules of Appellate Procedure applicable to appeals as a matter of right governs such appeals.

(a) If the court dismisses a legal action pursuant to a petition filed under this chapter, the court shall award to the petitioning party:

(1) Court costs, reasonable attorney’s fees, discretionary costs,
and other expenses incurred in filing and prevailing upon the petition; and

(2) Any additional relief, including sanctions, that the court
determines necessary to deter repetition of the conduct by the party who brought the legal action or by others similarly situated.

(b) If the court finds that a petition filed under this chapter was frivolous or was filed solely for the purpose of unnecessary delay, and makes specific written findings and conclusions establishing such finding, the court may award to the responding party court costs and reasonable attorney’s fees incurred in opposing the petition.

(1) Applies to an enforcement action that is brought in the name of the
state or a political subdivision of this state by the attorney general, a district attorney general, or a county or municipal attorney;
(2) Can result in findings or determinations that are admissible in
evidence at any later stage of the underlying legal action or in any subsequent legal action;
(3) Affects or limits the authority of a court to award sanctions, costs,
attorney’s fees, or any other relief available under any other statute, court rule, or other authority;
(4) Affects, limits, or precludes the right of any party to assert any
defense, remedy, immunity, or privilege otherwise authorized by law;
(5) Affects the substantive law governing any asserted claim;
(6) Creates a private right of action; or
(7) Creates any cause of action for any government entity, agency, or
employee.

20-17-109. This chapter is intended to provide an additional substantive remedy to protect the constitutional rights of parties and to supplement any remedies which are otherwise available to those parties under common law, statutory law, or constitutional law or under the Tennessee Rules of Civil Procedure.

Because litigation is often prohibitively expensive, bad actors can often intimidate critics into silence by threatening or filing baseless defamation lawsuits regarding a person’s written statements (called “libel”) or their spoken words (called “slander”).  For example, when faced with the prospect of having to spend tens if not hundreds of thousands of dollars in legal fees to defend one’s legal right to leave an unfavorable review of a business, self-censorship can become an extremely attractive proposition. The result of such self-censorship is to undermine both individuals’ right to free speech and the public’s right to hear and receive information.

Due to the Tennessee Public Participation Act, if you have been sued for defamation, libel, slander, false light invasion of privacy, defamation by implication or innuendo, the person suing you could be required to pay your legal fees.  However, if you have been sued over your speech, it is important to exercise your rights promptly.  If you need a speech defense lawyer and would like to purchase a consultation from Horwitz, you can do so using the following form: