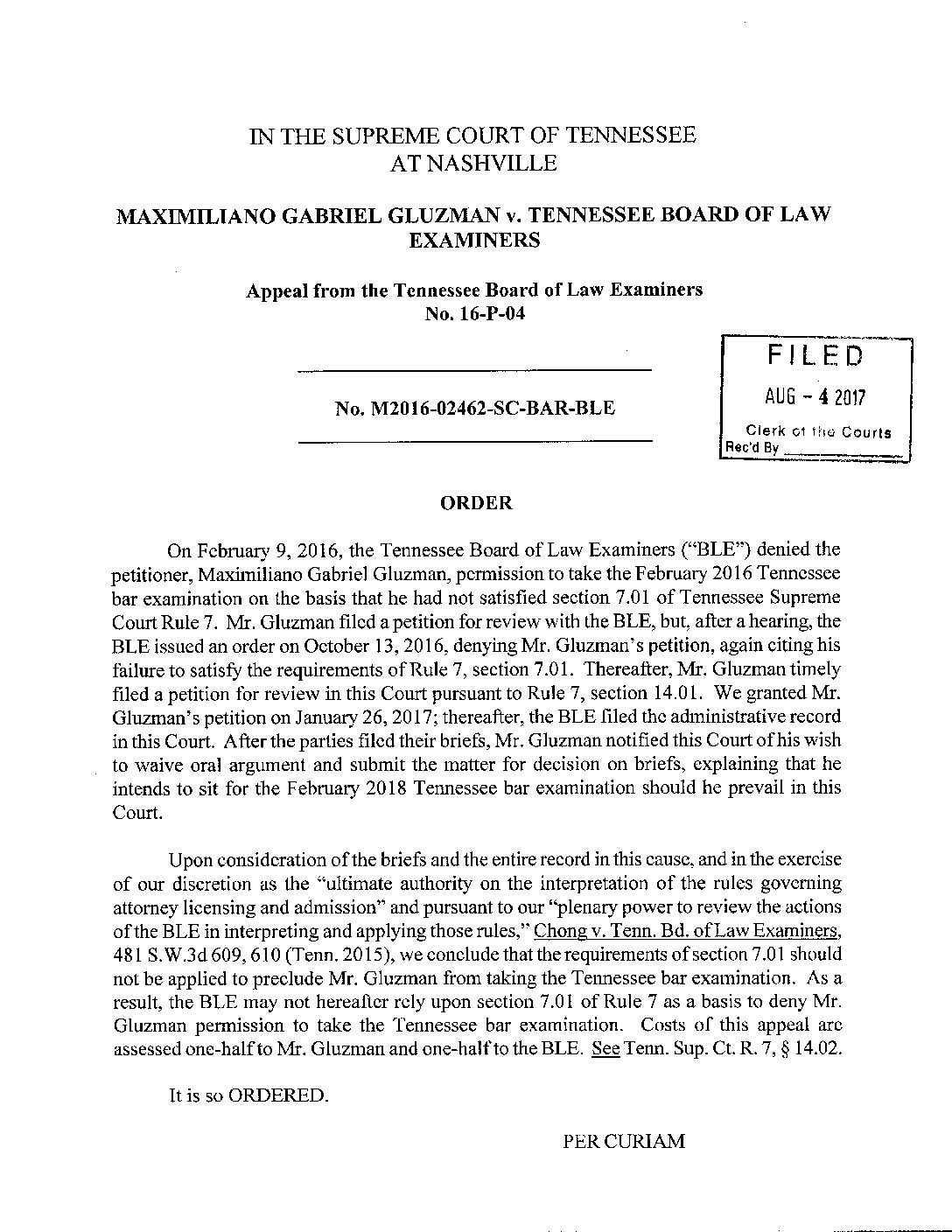 Tennessee Supreme Court Order Granting Mr. Gluzman's Petition and Reversing the Decision of the Board of Law Examiners
By danielahorwitz

Represented by attorney Daniel Horwitz, Tennessee bar applicant Maximiliano Gluzman—the “obviously very, very qualified” Vanderbilt Law School graduate who was denied the opportunity even to take the Tennessee Bar Exam—has officially won his case before the Tennessee Supreme Court.  Based on the Court’s order approving his petition, Mr. Gluzman will be able to take the upcoming bar exam scheduled for February 2018.

“We conclude that the requirements of section 7.01 should not be applied to preclude Mr. Gluzman from taking the Tennessee bar examination,” the Court held in a per curiam order.  “As a result, the BLE may not hereafter rely upon section 7.01 of Rule 7 as a basis to deny Mr. Gluzman permission to take the Tennessee bar examination.”  The Court’s order is available here.

“We are ecstatic that the Tennessee Supreme Court has vindicated Mr. Gluzman’s claim that he was wrongfully denied the opportunity to take the Tennessee Bar Exam,” said Daniel Horwitz, Mr. Gluzman’s attorney.  “Mr. Gluzman is as qualified to practice law as any attorney in Tennessee, and he will be a tremendous asset to the legal profession.  Justice was served today.”

The briefing in Gluzman v. BLE featured the participation of three leading national conservative groups, which argued that the Board’s crippling regulations violated Mr. Gluzman’s fundamental right to earn a living free from irrational government overreach.  Tennessee’s two flagship law schools—Vanderbilt Law School and the University of Tennessee College of Law—also filed petitions in the case after seeing students disenroll from their law programs once the Board began implementing its protectionist regulations.

Daniel Horwitz is a constitutional lawyer based in Nashville, Tennessee.  Selected case documents and media reports about the case are available below.  If you would like to purchase a consultation from Horwitz, you can do so using the following form:

–Brief of Respondent the Tennessee Board of Law Examiners

Selected news coverage about the ruling is available at the following links:

Posted in: Appeals, Daniel Horwitz, In the News 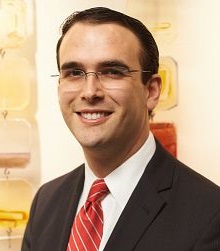 Daniel A. Horwitz is a constitutional lawyer practicing in Nashville, Tennessee.  He is the recipient of the 2018 Harris Gilbert Award from the Tennessee Bar Association and a nationally renowned impact litigator.  Horwitz has also been recognized by the American Bar Association as one of the top 40 young lawyers in the United States and one of the “Best of the Best” lawyers in Nashville by the Nashville Post.  His selected case history is available here.

Horwitz is a graduate of Cornell University and Vanderbilt Law School.  He is admitted to practice law in every court in Tennessee as well as the U.S. Court of Appeals for the Fifth, Sixth, Seventh and Eleventh Circuits.  A former judicial law clerk for the Tennessee Supreme Court, Horwitz’s award-winning legal scholarship has appeared in numerous law journals including the Harvard Latino Law Review, the University of Memphis Law Review, the Tennessee Journal of Law and Policy, the SMU Science and Technology Law Review, the Tennessee Bar Journal, and the Nashville Bar Journal.  His work has also been cited in several other legal and popular publications including the Washington Post, NPR, the Associated Press, the American Bar Association Journal, Forbes, the Nashville Business Journal, The Tennessean, the Nashville Post, The Memphis Commercial Appeal, The Nashville Scene, Slate, and in multiple pleadings filed before the U.S. Supreme Court.

Horwitz’s law practice consists primarily of speech defense, criminal and civil appeals, constitutional litigation, amicus curiae representation, criminal record expungement, and representing victims of crime.  He is also a sitting member of the Tennessee Advisory Committee to the U.S. Commission on Civil Rights and an active member of numerous community organizations in Nashville including the Amicus Curiae Committee of the Tennessee Association of Criminal Defense Lawyers (TACDL), which regularly handles appeals before the Tennessee Supreme Court on behalf of TACDL’s membership.

If you would like to purchase a consultation, you can do so using the form below.