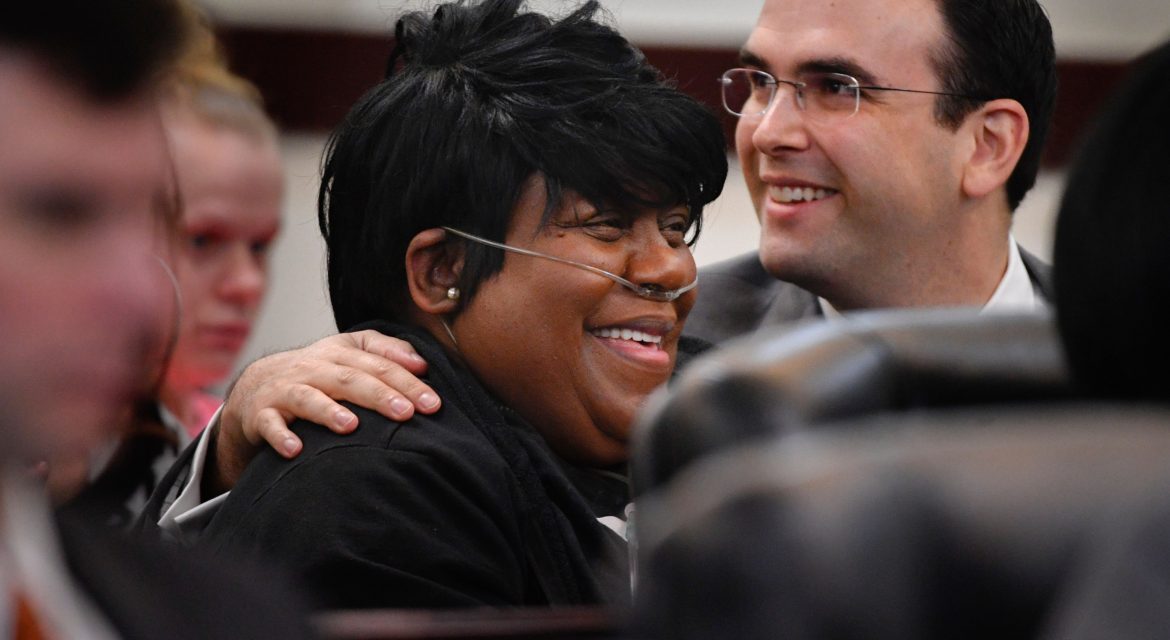 Annetta Bryant is all smiles as she as she gets a hug from attorney Daniel Horwitz, who represented her son, Calvin Bryant, who had previously been sentenced to 17 years for a low-level drug offense. Bryant was released seven years early Wednesday after a campaign that highlighted the racial biases that led to his lengthy prison term. (Photo: Larry McCormack / The Tennessean)
By danielahorwitz

Calvin Bryant—a beloved college student and high school football star whose sentence garnered national attention for its purposeless cruelty after he received a 17-year mandatory minimum prison sentence for a first-time, non-violent drug offense—was released from prison on October 31, 2018. Mr. Bryant’s release was made possible after his attorney, Daniel Horwitz, brokered a deal with Davidson County District Attorney Glenn Funk that enabled him to be released seven years early.

Due to the severity of Tennessee’s Drug Free School Zone Act—an intensely punitive sentencing enhancement that has nothing to do with protecting children, places drug offenses on par with the most severe, violent crimes, and can be applied to virtually every drug transaction that occurs within a Tennessee city—Mr. Bryant received a prison sentence for a low-level drug transaction that was longer than he would have received if he had committed Rape or Second Degree murder. His case attracted widespread calls for reform after it exposed prosecutors’ arbitrary use of the enhancement and its racially disparate application.

“This would not have been possible without a DA sticking his neck out to right this wrong, and without a legion of supporters,” Horwitz told The Tennessean. “This is—and I’m not exaggerating— the most unfair sentence I have ever seen. There is simply no circumstance in which it makes sense to punish a first-time, nonviolent drug offender more harshly than a rapist or a murderer.”

After his release, Bryant immediately re-enrolled at Tennessee State University to finish his degree and established a non-profit organization aimed at curbing youth violence and steering kids away from gangs and drugs. Selected media coverage of Mr. Bryant’s case appears below.

–The Tennessean: Sentenced to 17 years for low-level drug charge, Nashville man gets freedom thanks to deal with prosecutors

–Reason: How a Drug-Free School Zone Sent a Tennessee College Student to Prison For 17 Years

–The Tennessean:  He got 17 years for selling drugs near school. Now 12 Nashville officials are fighting on his behalf